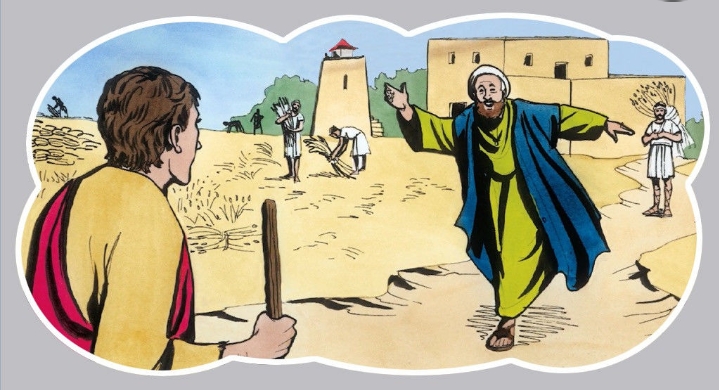 Almighty Father, we ask for the Holy Spirit to teach and guide us on how to teach our children Your principles on forgiveness. Father let the same principles take effect on us too as well as on our children. We fail on it so many times yet Your mercies never come to an end; they are new for us every morning. Renew and perfect our minds in Jesus name. We thank you Lord. Amen

As we teach our children, remember you do not have to go through it all in one sitting. Watch on the child’ cues and tone of discussion should go by age and capability. Read more here.

To forgive – to pardon someone, to stop blaming the person for something ‘done’ or ‘said.’ In some cases, it could be on something ‘not done’ or ‘not said.’

Have you heard the story that Jesus taught concerning a boy who ran away from home? He is commonly known as the prodigal son.

11 Then Jesus said, “A man had two sons.12 The younger son said to his father, ‘Give me my share of the property.’ So the father divided the property between his two sons. 13 Then the younger son gathered up all that was his and left. He traveled far away to another country. There he wasted his money in foolish living.14 He spent everything that he had. Soon after that, the land became very dry, and there was no rain. There was not enough food to eat anywhere in the country. The son was hungry and needed money.

15 So he got a job with one of the citizens there. The man sent the son into the fields to feed pigs. 16 The son was so hungry that he was willing to eat the food the pigs were eating. But no one gave him anything. 17 The son realized that he had been very foolish. He thought, ‘All of my father’s servants have plenty of food. But I am here, almost dying with hunger. 18 I will leave and return to my father. I’ll say to him: Father, I have sinned against God and against you. 19 I am not good enough to be called your son. But let me be like one of your servants.’ 20 So the son left and went to his father.

“While the son was still a long way off, his father saw him coming. He felt sorry for his son. So the father ran to him, and hugged and kissed him. 21 The son said, ‘Father, I have sinned against God and against you. I am not good enough to be called your son.’22 But the father said to his servants, ‘Hurry! Bring the best clothes and put them on him. Also, put a ring on his finger and sandals on his feet.23 And get our fat calf and kill it. Then we can have a feast and celebrate! 24 My son was dead, but now he is alive again! He was lost, but now he is found!’ So they began to celebrate.

25 “The older son was in the field. As he came closer to the house, he heard the sound of music and dancing. 26 So he called to one of the servants and asked, ‘What does all this mean?’ 27 The servant said, ‘Your brother has come back. Your father killed the fat calf to eat because your brother came home safely!’28 The older son was angry and would not go in to the feast. So his father went out and begged him to come in.

29 The son said to his father, ‘I have served you like a slave for many years! I have always obeyed your commands. But you never even killed a young goat for me to have a feast with my friends. 30 But your other son has wasted all your money on prostitutes. Then he comes home, and you kill the fat calf for him!’31 The father said to him, ‘Son, you are always with me. All that I have is yours. 32 We had to celebrate and be happy because your brother was dead, but now he is alive. He was lost, but now he is found.’”

What God tells us on Forgiveness

15 After Jacob died, Joseph’s brothers said, “What if Joseph is still angry with us? We did many wrong things to him. What if he plans to pay us back?” 16 So they sent a message to Joseph. It said, “Your father gave this command before he died. 17 He said to us, ‘You have done wrong. You have sinned and done evil to Joseph. Tell Joseph to forgive you, his brothers.’ So now, Joseph, we beg you to forgive our wrong. We are the servants of the God of your father.” When Joseph received the message, he cried.

18 And his brothers went to him and bowed low before him. They said, “We are your slaves.”

19 Then Joseph said to them, “Don’t be afraid. Can I do what only God can do? 20 You meant to hurt me. But God turned your evil into good. It was to save the lives of many people. And it is being done. 21 So don’t be afraid. I will take care of you and your children.” So Joseph comforted his brothers and spoke kind words to them.

Matthew 6:12, Forgive the sins we have done,
just as we have forgiven those who did wrong to us.

Ephesians 4:32 Be kind and loving to each other. Forgive each other just as God forgave you in Christ.

Romans 6:23 The payment for sin is death. But God gives us the free gift of life forever in Christ Jesus our Lord.

1 John 1:9 But if we confess our sins, he will forgive our sins. We can trust God. He does what is right. He will make us clean from all the wrongs we have done.

Ephesians 1:7 In Christ we are set free by the blood of his death. And so we have forgiveness of sins because of God’s rich grace.

Bring it closer home. Let your child pretend that someone has broken his favourite toy. Then ask for forgiveness and let your child practice on accepting the apology.

Let your child reflect on any instances that someone has asked him/ her for forgiveness. What happened. Did she forgive or not? How did she feel after that?

What are some of the areas that we have to ask for forgiveness from God or friends? Example Genesis 50:17 Joseph forgave his brothers. How about when we need to forgive others?

Do you know that for God to forgive us our sins, we have to do the same to others too, confess our sins, ask for forgiveness then believe in our hearts that Jesus died for our sins hence we are forgiven also? We can do all these in a prayer of faith.

Prayer Sample on the Grace to Forgive others

Father, I pray that your grace may be abundant in me to forgive others (or insert name) and to understand how important forgiveness is to you and us. Father, help me to forgive no matter what happens to me or how I feel. Thank you for giving me this opportunity to pray for my enemies and not to curse them. Thank you, Jesus, for forgiving me my sins too. In Jesus name, I pray. Amen.

Check on the Prayer Sample for Forgiveness of Sins; Salvation for Parents here.

Prayer Sample for Forgiveness of Sins for Children

Dear Lord, I know i am a sinner. I ask for your forgiveness for my sins. I believe you died and rose again on the third day. I turn from my sins. Come into my heart and life. Teach me your ways. I want to trust and follow You as my Lord and Saviour. Thank You, Jesus, for forgiving me my sins. Amen.

Read extra on the story of the Unforgiving Servant Matthew 18:21-35