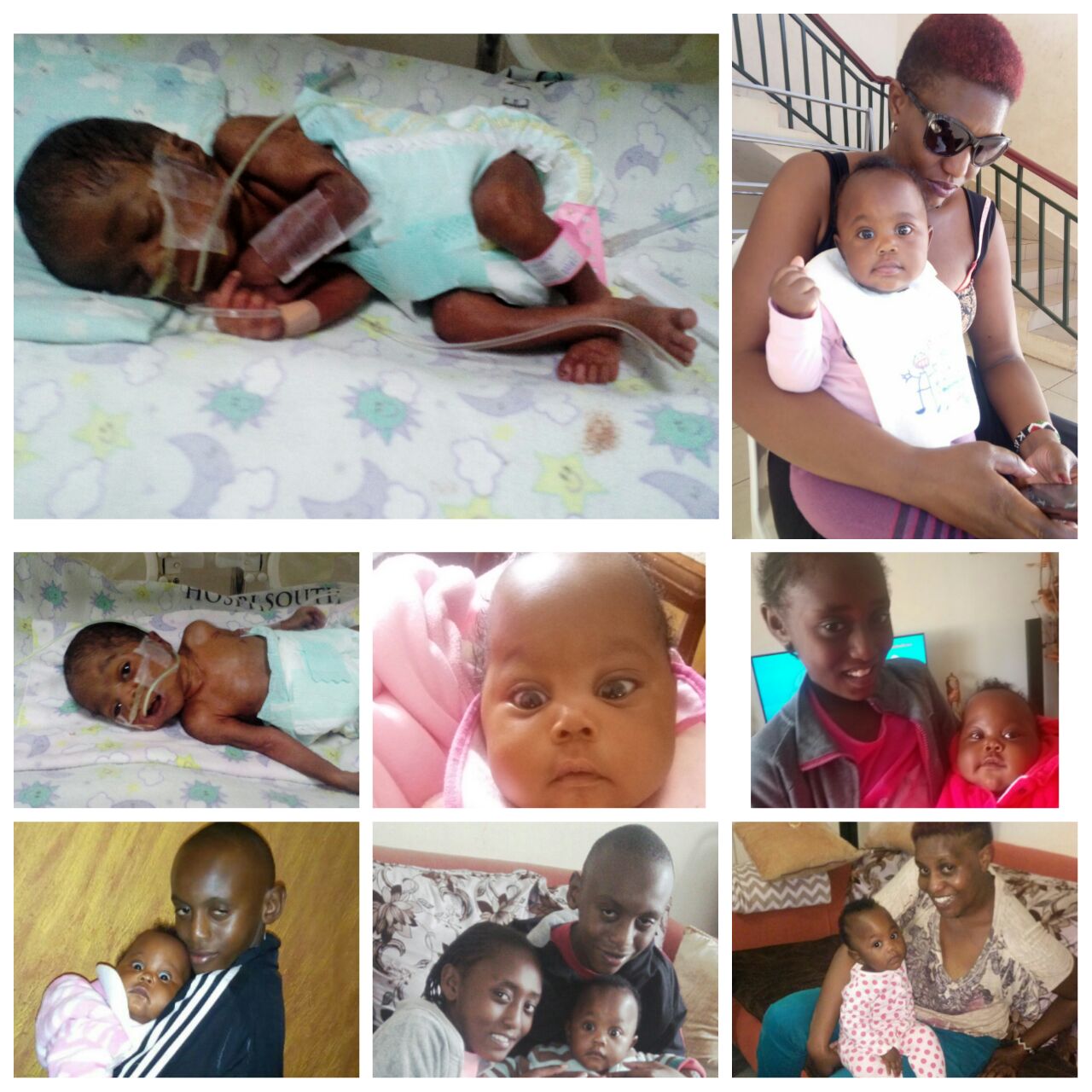 It all started in April 2016 when I had gone to visit my grandmother together with my family. As soon as we got to the compound and alit from the car, I felt a cold sensation going down my leg. Get more information about lightning link slot free play. I lifted my maxi skirt up to reveal my worst fear.
My water had broken prematurely, in a remote village of Kisii, a 45 hour drive away from Kisii town. Unfortunately I was the only driver in tow, so I had to bravely get back on the driver’s seat and get myself to hospital, all the while tears rolling down my face.
To cut the long story short, my arrival to the hospital presented a more depressing twist as the doctors revealed that they could not deal with my emergency. I remember calling AMREF flying doctors to enquire on how much it would cost to evacuate me to Nairobi. I got a shocking quotation of Ksh 450,000, a figure that was way beyond our budget at that juncture.

The operator was kind enough to advise that we look into subscribing for the annual Ksh 2000 package in future should such an emergency arise. At that point the only other option was to get an ambulance which would cost us Ksh 17,000 for the trip to Nairobi. We kicked off the journey at about 11pm using the Narok route. At about 3 a.m., I arrived at
the Aga Khan University Hospital where a team had already gathered in anticipation. My obstetrician as well as other medical staff received me and tried their best to keep the pregnancy on. I was only 26 weeks pregnant and the ultrasound had indicated that my baby weighed under 800 grams. But two days later, I went into labour in the wee hours of the night and delivered a 780grams baby boy at exactly 6.15a.m.

From here on, the reality of being a preemie mom hit hard. I remember going down to the NICU with my husband to see our son and we were shocked. He looked so tiny and fickle, with the veins so visible as though he had no skin on him. All we could was shed tears and say a word of prayer that God would intervene and fight for his survival. We named him Junior, after his dad. It was so tough on me with the pressure from his caregivers to provide milk for his feeding, yet my stress levels were so high that my breasts could barely provide a drop of milk.

By that evening, I had received counselling from the team at the hospital that my son would pull through, though his paediatrician was cautious about getting my hopes too high. Two days later I got discharged leaving my angel behind. That was the hardest part. I couldn’t understand how they expected me to go home without my bundle of joy, trusting them to care for him as best as I could. With tears rolling, I went to the NICU to bid him farewell, promising to be back before the break of dawn and said a prayer for him. It was torture seeing all those tubes running through his minute body and scars of needles where he had been pricked numerously.

It became routine for the next few days that my day would be spent between home and the NICU. I would rise and ensure I beat traffic from Embakasi to Parklands just to be with him by 7a.m. The rest of the day would be spent between the NICU and the expressing room, where I would gather enough milk to last him until the next day. I made it routine to leave the hospital at about 8p.m. each night. 5 days after his birth, I remember noticing Junior’s stomach seemed swollen and bloated. I asked the nurse who was attending to him about it and she said that he had just fed; something that did not sit well with me. My heart was not at peace and I couldn’t help but imagine things were not going well.
Later that day, I was approached to sign some forms for some procedures that the doctor wanted carried out on my son. More shocking was that Junior had not fully responded to the phototherapy treatment to address his jaundice and they now wanted my consent to do a total replacement of blood in his tiny body with fresh blood.

At this point all I could do was hold on to hope that God would intervene because I knew his case was more severe than they wanted to let on. On day 6, my son’s condition deteriorated, his skin colour was pale and he no longer responded to my touch as he would previously. All I could do was pray as the medical team evaded most of my questions and his doctor became elusive. On day 7, I could not sleep and was at the hospital by 5a.m. demanding to see his doctor for an explanation of what was happening to my son. I recall being told that the doctor was in theatre and I would be informed once she was available. A look at my son’s condition made me sink into depression as more tubes ran through him with numerous monitors beeping from all angles.

Later that afternoon, I remember coming down to NICU after expressing milk to find his cubicle curtains drawn and seeing many silhouettes moving around the room. I knew my baby was being snatched away from me and all I could do was pray for God to receive him well. After about 15 minutes the curtains were opened and medics walked out. I grabbed one of the doctors demanding to know what was happening. She explained that my baby was suffering serious bouts of Apnea, and they had to resuscitate him as his heart had stopped pumping.

I quickly rushed to his incubator and ignored the nurse’s request not to touch him. I caressed his small feet to let him know that mommy was around and despite shedding tears, I sang to my boy. God had told me it was time to let go and the song “In the sweet by and by” just came to mind and I sang. Before I went far, the monitors started blaring again and the medical team rushed in, this time with his doctor in town. They asked me to leave the room but I didn’t budge and vowed to stay on.

That was the most tormenting time of my life as I watched 6 adults working on my little boy. Others pumping his lungs, others pricking needles with various medications from different angles but his heart refused to beat. I watched shattered for about 5 minutes and then I yelled and told them to just STOP. Just let my baby be, let him rest, it is well with me. Just let my baby be. My Junior passed on 7 days after staying in the NICU due to complications and infections he had suffered. It was harder for me 2 days after his death, when the doctor confessed to me that my baby would have survived had they conducted further tests 2 days after delivery to detect any infections that may have cropped up. I came to learn that he had suffered both heart and brain damage that even if he was to survive, he would have been severely disabled.

I refused to let this situation bring me down and conceived again in June that year. This time round the doctor established that a small cyst on my cervix had triggered the premature labour and carried out a MacDonald stitch procedure to secure the pregnancy for a longer term. But the scenario would play out yet again as on my 27 th week, two days before my doctor’s appointment, I was awoken at 4 a.m. by a gash of amniotic fluid. I was scared and sneaked out to go to the hospital fearing for the worst, without letting anyone in the house know.

I drove to hospital and admitted myself having called my doctor who agreed to meet me there. I was monitored and put on bed rest and on the evening of the following day, the doctor made the call to remove the MacDonald stitch and trigger labour as most of the amniotic fluid had leaked and the baby was at risk of contracting infections.
On the same night at about 1a.m. my angel Samantha Malaika came into this world weighing 1.1kg. Although my fears and wounds from the previous experience were still fresh, the glow in her little eyes gave me optimism. She would later lose weight to weigh 850gms before she started the upward trend.

I got a scare one day after her doctor prescribed sodium injections to counter her deficiency. She reacted to the sodium badly and even had to be resuscitated at some point when her tiny body gave in. Fortunately the medical team managed to get her lungs back to work and she was put on oxygen for three days. Other than that, Samantha had minimal complications and was discharged after 45 days in hospital. The greatest challenge however was raising money to cater for the two hefty medical bills in one year. To
date, her progress is impressive and her milestones just slightly delayed. I thank God each passing day that He gave me a testimony through her of His mercy and grace. And I am comforted knowing Junior is watching down on us from above being our beloved guardian angel.