Joselyne Chesoli’s water broke when she was three months pregnant. When she went to the hospital, she was advised to terminate the pregnancy because the baby would not survive.  She was diagnosed with Premature Rapture of Membranes Disorder. “The doctors told me that I was at risk of getting an infection in my uterus,” she says. Chesoli declined. “I was not in any pain and the baby’s heartbeat was normal, I did not believe that was a good reason to procure an abortion,” she says.

Chesoli was put on complete bedrest for the rest of her pregnancy. She was required to drink 20 litres of water everyday to help increase amniotic fluid volume as well as go for ultrasounds three times a week. Two months down the line, at 27 weeks, however, she started bleeding. Her baby’s heartbeat also became faint and an emergency Caesarian Section to remove the baby and save her life was recommended.

“We thought the baby would be dead. But miraculously, a 27-week-old baby came out alive,” she recalls tearfully. Still, she was told that there was only a small chance that the boy would survive. Chesoli was devastated. Nursing a CS wound and the agony of her son lying helpless with an eventuality of death at the Neonatal Intensive Care Unit (NICU) was traumatic. Even more traumatising was when she first saw her 800 grammes baby lying in an incubator. “My boy, Jerome, was sharing an incubator with three other babies. He was tiny and looked like a strange creature. You could see each vein on his body. His body looked like a snake peeling its skin. He had no hair and couldn’t make any sound. You would only know he is crying if he slightly opened his mouth,” she describes.

Living at the hospital was a series of one sad event after another for Chesoli and her son. Another time, she found the two children, who were sharing an incubator with her son had passed on. “My son was lying in the middle. My heart sank. I could not cry. I lost all the energy and my legs became weak. This was the toughest moment of my stay at the hospital. It was a miracle because my son at that time, due to the phototherapy session had lost his weight to 500 grammes, yet he survived while the children who passed on had over 1.5 kilogrammes,” she testifies. 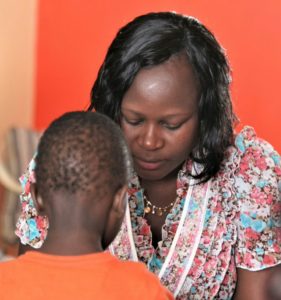 A few days past seven months, when they were discharged from the hospital, Jerome weighed 1.8 kilogrammes. At home, the task of caring for a fragile baby was arduous. “The baby could not latch on the breast for too long. He got tired too quickly, I had to spoonfeed him. I exclusively breastfed my son for one year. Again at about a year and a half, Jerome developed inguinal and umbilical hernia, which he underwent surgery. Later, he caught stubborn eczema that went on for months before it cleared,” she says. Chesoli says giving birth to premature baby and taking care or of them is not an easy task. “It is straining emotionally, physically, financially, psychologically and socially. I lost friends and I had to shut down my stationery business to fully care for my baby,” she explains.

Jerome also became a late bloomer, he made his first steps and said his first words at two and half years. He went for weekly checkup and physiotherapy sessions for 2 years. He suffered from minor heart problems and had reflux for 2.3 years. And he could only take blended food until he was two years old.

Chesoli says preemie mothers face a lot of challenges. “We are stigmatised for having a preemie baby and most often you meet mean people who will make insensitive comments,” she says. Adding, “There is a friend whose child is older than mine by five months, who told me to see a pastor who would pray for my son because he was not reaching his milestones,” she mourns.

She found comfort one year ago through Preemies Africa, an organisation led by Brenda Anyumba, also a preemie mum, that seeks to provide support to premature babies and their families in Africa. The group’s vision is to supply adequate medical resources, promotes prematurity awareness and advocacy as well as contributes to educational resources for preemie parents and caregivers, thus enable premature babies to thrive in life.